Ballyheigue Castle Golf Course was officially opened on Saturday May 18th, 1996 by An Tanaiste and Minister for Foreign Affairs Mr. Dick Spring T.D. The golf course is a 9-hole Woodland course built on 90 acres of land on the grounds of Ballyheigue Castle. The course is located on the Wild Atlantic Way with panoramic views over Tralee Bay, Banna Strand and Slieve Mish mountains. Playing the course you can be pleasurably distracted by the immense beauty of the surrounding landscapes of North Kerry.

The History of the Castle
The earliest known building on the Castle site was the dwelling of the Norman settlers the Cantillions. Tadhg Cantillon owned the first Castle on the site. It was from his name that ‘Baile Ui Thadgh, Ballyheigue, got its name.

After the Cantillons were dispossessed in the late 17th century, the Crosbie family came to own the land in Ballyheigue. A new house replaced a long low thatched mansion around 1758 and then Colonel James Crosbie built the castle around 1810. The well-known architect Richard Morrison (1767-1849) and his son William were commissioned to design a new mansion in the Castle style incorporating the existing house.

The Castle was burnt on two occasions, first in 1840 and again in 1921. The Castle was restored after the fire in 1840 under the tenure of the landlord, James who passed it to his son, James Dayrolles in 1890.

The Castle was bought by Jeremiah Leen for £4000.00. On the night of the 27th of May 1921, the Castle was burned for the second time, just after the completion of the sale. At this stage during the War of Independence, there was a policy of burning buildings which were seen as a symbol of British rule in Ireland.

The Golf Course
The first idea for the golf course came after a few holes of golf in Tralee Golf Club. Anton Casey approached Michael Dowling and Brendan Moriarty with the idea of opening a golf course in Ballyheigue. After some consideration over a cup of coffee it was decided the Castle grounds would be ideal to build the course. Jerry O Halloran was approached, and he agreed to lease the land for a golf course.

A course architect Roger Jones, who also designed and built the Gap of Dunloe Golf course, was appointed.
A builder originally from Moyvane, Frank O’ Dowd of Intergolf Ltd, Killarney and US was hired due to his work with Robert Trent Jones when building the new course for Ballybunion. Local man John Hare (RIP) also worked on the course with his JCB. Jack Lucid was appointed the first green keeper.
The Office staff were Secretary/Manager James Broderick assisted by Patrick Dillane. 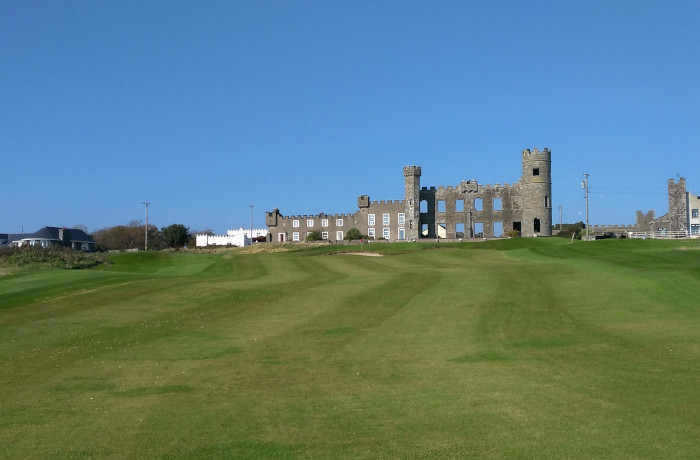